'In reading them, they read us.'
Matthew Lutton considers what it means to take on the classics.

I am frequently attracted to reinterpreting older stories. We call them classics, but I don’t like the associations that accompany the term—the assumption that they are perfect, or that they might contain a correct way to be told. They are never perfect, but they survive because they resonate, and have not yet exhausted all they have to say. And in reading the classics, they read us. They expose you.

To interpret a classic play is to read it from a different point of view. To do so, you must confront the problems of the story, and be comfortable knowing that there is no 'correct' or 'right way' to tell this story—there is only interpretation.

Interpretations and adaptations of older stories are not radical. They are traditional. Even before the emergence of the role of the director in the early 20th century, Western playwrights regularly adapted the classics. Greek playwrights adapted Greek poets. Romans adapted the Greeks. The English and Elizabethan writers adapted the Romans. The creation of the printing press meant everyone wrote adaptations of everyone, and the invention of copyright meant adaptation had to be credited for the first time. The myth of King Oedipus can be found in every epoch—sometimes in plays called Oedipus, sometimes under a different title, but every era has used the story of the cursed King to examine their own societal flaws.

Telling old stories in new ways has drawn people to theatre for centuries. You might see the same story again and again, but, hopefully, it will never be the same experience.

There are two main, interconnected skills and steps a director needs to cultivate to create an interpretation. The first is craft: the craft of how to have an impact, through the construction of empathy, suspense, or intrigue. There is a sense of mathematics behind this—a balancing of the equation. To create impact (a loud moment), the moment prior needs contrast (a soft moment). A scene will only feel fast if we have just experienced what is slow. Strength is only visible in a character when contrasted with vulnerability. Dreams are only inviting when we’ve met the dreamer or experienced reality.

The second skill is using this craft to make interpretive decisions, by elevating and demoting particular ideas within a story. These choices are far more subjective.

When interpreting a classic, I construct a hierarchy of ideas. To make one idea more important, I need to give it space by making other ideas less important.

If I want the interpretation to focus on a particular character’s experience, I look to make that character more central by being the vehicle for an audience’s intrigue. In tandem, I look at how to reduce the intrigue of other characters. This is finding the centre of the interpretation: I allow the character (or characters) I consider to be at the centre to have the most present and dynamic emotional shifts. Elevating their emotional journey, I give them the greatest contrast, the most theatrical time, and consider placing them at the centre of the image-making. I direct the audience’s gaze to them, and diminish the interest in others.

If there is a theme (I prefer to call them ‘big ideas’) I want to emphasise, I look at how to elevate it. Every story has many ‘big ideas', so I need to select which big ideas this production will focus on. When working with actors in a rehearsal room, I look to where these ideas are present in the language of the play, encouraging performers to make these the most memorable words for an audience. Then I ensure there’s space and time around these lines, so the audience will hear and remember them. 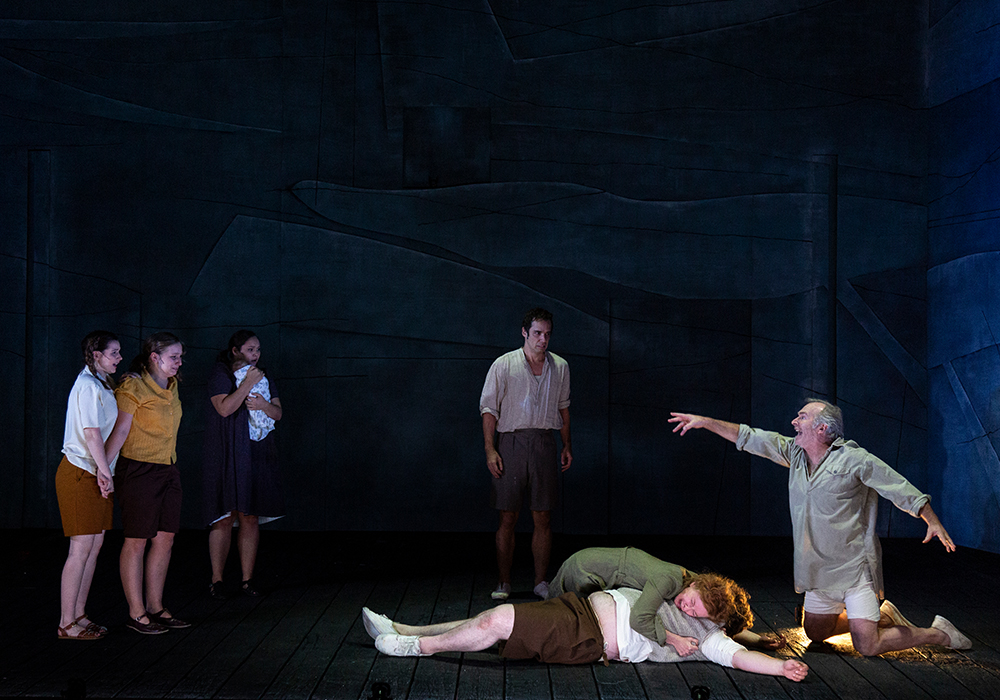 In directing Cloudstreet I wanted to heighten the ideas of 'us and them' in the character conflicts, and elevate the way nature can connect you with the past. Significant amounts of theatrical time were given to images and scenes where characters entered dream states prompted by nature or the spirit world. Scenes where characters displayed xenophobia were emphasised—Quick’s support of violence, for example, or Oriel’s competitiveness with those that don’t affirm her views. To bring these aspects into focus, the domesticity of the story was demoted, and scenes about money and materiality (the gambling, the economics of the shop in the house) were given less emphasis.

To illuminate specific facets of a character’s inner world, I seek moments of conflict. It is in conflict that we can express a full spectrum of emotional complexity about how a character survives. To use Jeanette Winterson’s term, we 'feelings-swap' when in conflict, to keep the undesirable emotions away—to avoid feeling lonely or afraid, we feel angry instead. I therefore look for a different emotional subtext in moments of conflict for characters I want to elevate, and in moments that focus on the ‘big ideas’. For me, this is how I shape the structure of the interpretation.

In Michael Gow’s Away I wanted to illuminate the way people in states of grief push each other away. In the scenes where Tom is arguing with his parents, I elevated the blame the parent's place on their sick son—their inability to protect their son from cancer expressing itself as frustration and anger with their son. It’s a misdirected rage: they are raging at the cancer, not their son. In a parallel narrative Coral and Roy have already lost a son. Here I elevated the way Roy humiliates Coral. He should comfort her, but her grief exacerbates his own, so he protects himself by pushing her away. By the rule of opposites, elevating the pain of these moments made the moments of healing and beauty more impactful, when these characters stop misdirecting their emotions in the second half of the play.

All these directorial decisions make you vulnerable. You must assert an opinion knowing it is subjective. You display ego when doing this, and that can be difficult. Some audience members will resonate deeply with your opinion, others will disagree. As soon as you assert an opinion, be prepared for disagreement. You have exposed yourself. Counter opinions are aplenty. But conversation and progress rely on debate.

What happens when an old story resonates with you personally as an artist, yet its politics and assertions are dated or problematic? These are stories to be dealt with. They still speak to fundamental human flaws, and the fact these flaws haven’t changed makes them so piercing. But our societies and politics are different.

Erasing the story is forgetting the past—the last thing we want to do. Not addressing the problems is casting a blind eye, and for a director that’s not good enough. You need to make decisions, and ask questions. You can remove parts of the story, but does the erasure create harm or benefit? You can draw the audience’s attention to the problem and comment on it, but in doing so are you endorsing it? Do you add new material (an 'adaptation') to counterbalance or reframe what’s problematic? How do you confront what’s problematic, while holding onto what resonates with you?

This is the process of interpretation. A choice needs to be made. This is how the play exposes you.

But making decisions as a theatre director should be a collaborative process. I don’t and can’t develop an interpretation in solitude. Only by sharing my opinions, testing them, and challenging them with collaborators do the ideas, and then my confidence, form. I frequently change my mind, and take time to reevaluate. A classic exposes all of us differently. My collaborators will see different problems and potency. By discussing and debating our views, my views change, and we clarify what our interpretation is focussing on and what it is not saying. This process of negotiation gives me insight into how an audience might read the production, and gives us clarity as a team about what we are creating. And this clarity gives us the confidence to be creative.

Making new from the old, and confronting the past as we think of the future, has been part of theatre from the very beginning. 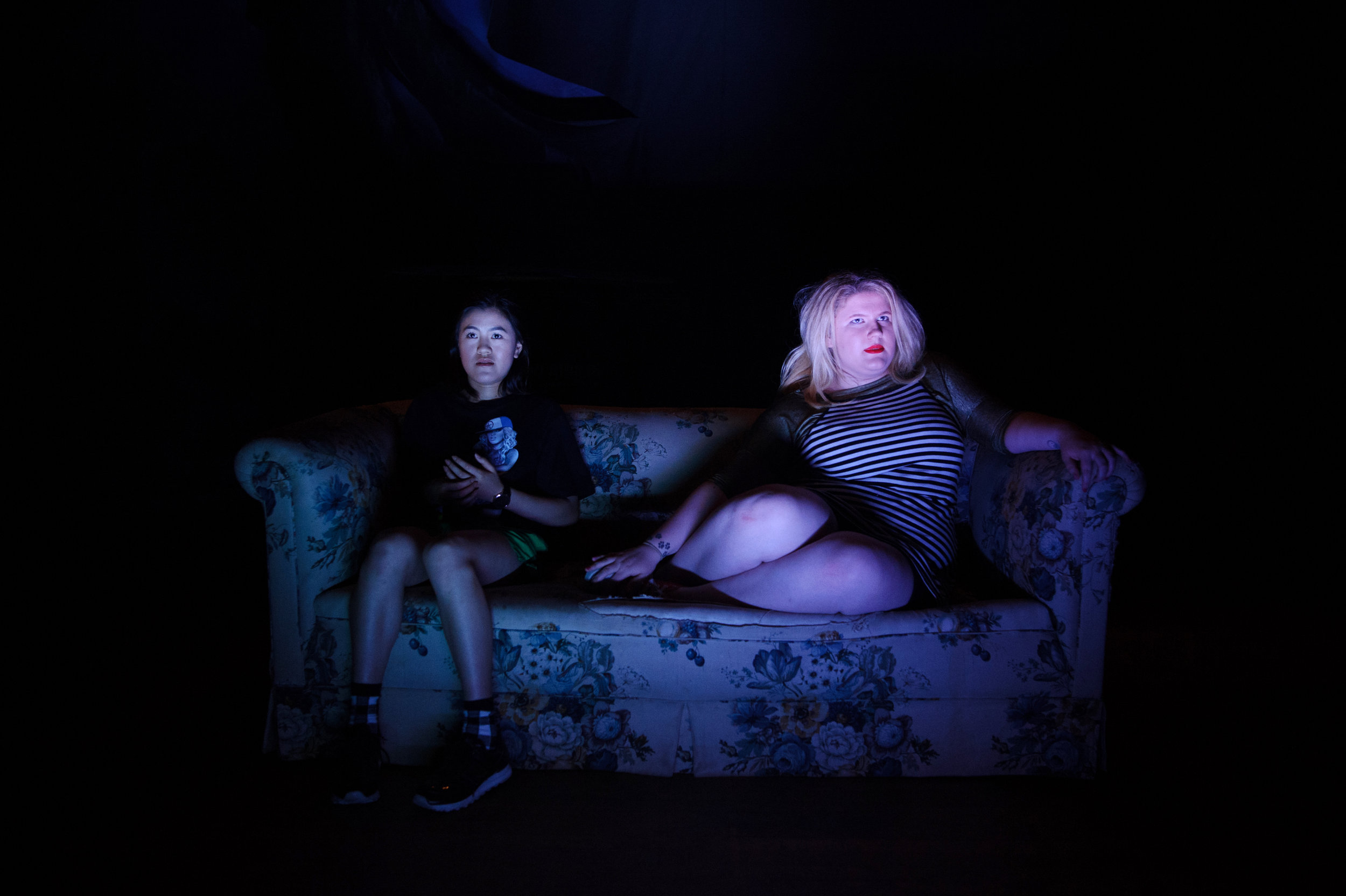