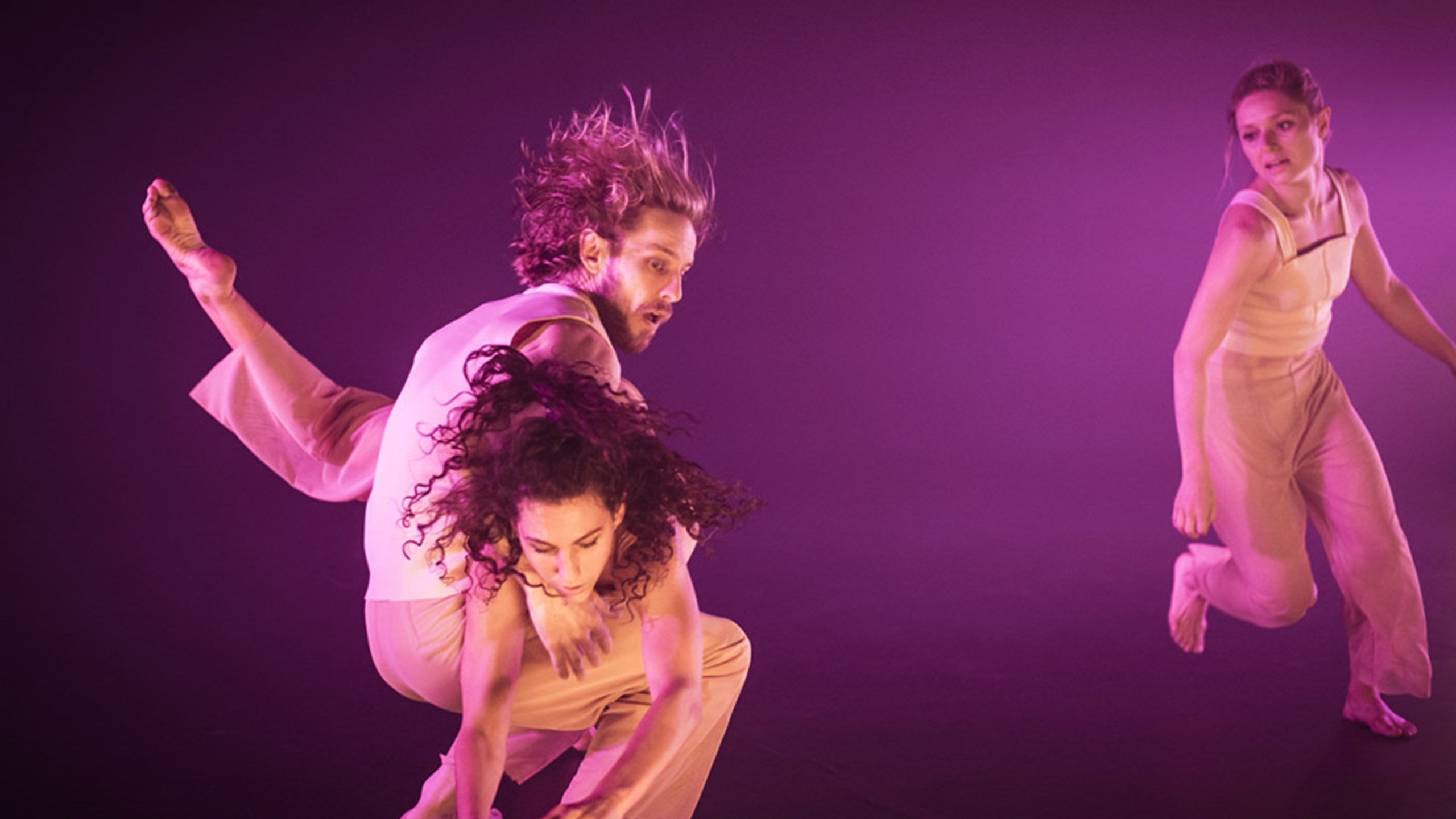 Director Matthew Lutton and Choreographer Stephanie Lake are currently working on a new project together, with text by playwright Emme Hoy.

We sat down with Matthew and Stephanie at the end of a two week workshop to get a window into how they work, and how the forms of dance and theatre are coming together.

How would you describe this project?

Matthew: That's actually a really good question because when we started talking about this show, we made a sort of list of all things it wasn't going to be. I think we both felt like dance-theatre has a really bad name.

Stephanie: There was a mutual acknowledgement of the fraught nature of dance-theatre. And I think that's a really good place to start, saying: 'Okay, we don't want to do that... And we definitely don't want that to happen...' So that was part of the common ground that got this started: what not to do.

M: We wanted to bring dance and text together, we didn't want to ever dance a story.

M: No illustrative dance. No liturgical dance. No dancing the emotions of the story.

S: We wanted to make a work in which the choreography and the text played an equal role in telling a story. That movement and choreographic language would somehow fill in the holes left by the text and the narrative. It’s a bold ambition, and I think we're both aware of how tricky it is to achieve.

M: I just realised that perhaps it's similar to the way lyrics and music work together to create a song. You can read the lyrics in isolation, but when you combine them with the music it actually fills it out. It makes it full. So the music is the movement in this sense and the text is the lyrics: two strands that are incomplete when separated, but together form a greater whole.

S: Yes. They somehow click together. And we're striving to make a piece where if either element was missing, it wouldn't quite be complete. It wouldn't make sense.

M: We’d been talking for a while about how to work together in a way that brings these two forms together equally—the text and the choreography.

S: We worked together on Away, on Black Rider: The Casting of the Magic Bullets and on Skeleton Tree, but those relationships were quite different. This is a co-creation, so we're trying to devise the whole work together.

So where are you at in the process?

S: We’re at the end of our first creative development, and it has really exceeded my expectations in what we've achieved. With the year we've just had, with everyone being in lockdown for so long, I really thought we'd be much rustier, and that things would be much more wobbly or careful. I thought the dancers would be having to take it much easier, but they've just thrown themselves into everything, almost with a kind of renewed vigour. It's really interesting—the opposite thing has happened. I think because of this rest time, everyone's very energised and kind of inspired. There’s a freshness, and I actually feel much less critical of my own work. I'm more open-minded. It’s been the best way to end a horror year, to be in this really open creative space, a world of possibility.

M: I also think what is really interesting is that we started this workshop with a full text. Not the final text, but a full draft, and the dancers are generating material in response to that text. And you said something on the third day, about how everyone seems to be in the same world, and how connected the dancers already were to what they were using their body to communicate.

S: Absolutely. Often in a choreographic process, there is some kind of underlying concept always, but it's much more nebulous. You're searching for the work as you're making it, so it's much more open-ended in the beginning.

This process is so grounded. We've got the narrative. We've got the text. So many of the elements are already in place, and such a clear vision, that it feels like everything that's being made is being built on this firm bed.

Tell us about what's happening in the room. How do you two work together?

S: This is somewhat of a choreographically focussed couple of weeks. Matt and Emme (playwright Emme Hoy) have been working quite intensively on the script already, so we’re getting a kickstart on the choreography. I'm trying to get a big palette of ideas so that we've got lots to play with.

I'm largely directing the process at the moment, but Matt's in the room all the time. And it's great having his eye and ear on what we’re making. I can get really seduced by the choreographic stuff and the physical stuff, and I find Matt will often pick up on the particular, some seed of meaning. He’ll often go straight to the point as to what’s interesting, or what specifically we might pull out and use.

And Matt, how would you describe how Stephanie works and responds to the text?

M: I feel like I've watched you do it two ways: either asking the dancers to take words from the script and create a collage. So it's finding a specific stimulus in the language, giving a movement intention for the dancers, to then generate material. Or you've had a visceral response to something in the text, and you're following that impulse, creating a sequence on the dancers. I love watching this process of material being generated. I’ll then mainly think about placement, going 'Oh—that's something for the ending'.

S: In these beginning stages of creation I'm much more about the broad brush stroke. I'm searching, so I make lots of stuff. I know lots of it is no good, but I just keep following the shiny thing, trusting that it will come together and make sense later on. Whereas Matt's always got that eye and ear for how it connects back to what we've set out to make.

What kinds of challenges are you anticipating as the process continues?

M: Bringing the text and the choreography together is going to be the challenge. I think we know deeply what we don't want it to be. A few times we've asked people to read the text and gone 'Eeek—that doesn't work'.

S: It's always pushing and pulling.

M: We've now got quite a palette of material, and a palette of ways to combine the elements. The challenge will be mapping it all together, constructing the overall shape of the show.

Through this workshop I've really learned how, as an audience, your body responds to each element. If you go into too much text for too long, you'll forget to take in the choreography. And if you sit watching too much choreography for too long—

S: You can lose the story.

M: So this ebb and flow of responses you have will be key to the success of the show, but we won't know that until we can start stringing it all together. You've got to keep both balls in the air.

S: This is really the honeymoon period—the fun, exploratory, generative part of the process. It's definitely meaty and interesting, but the challenging stuff is still ahead.

I know already it's going to be an unusual way of working for me once we start structuring the material. Normally I would now be thinking about how each piece of choreography could connect—how that trio could lead into a solo, which would then make sense to bring in that next thing. But with this project there's no point in thinking about structure yet: both the text and the choreography will need to work together to form the structure. It's really unusual. And cool.

What advice do you have for other artists venturing into this kind of unusual collaboration?

M: This approach of creating content separately has been a revelation to me. We'd developed the text to quite a degree before this workshop, and are now developing the choreography quite separate from the text. We've both been involved in both of those processes, but I think the union will be stronger now that both parts have their own integrity.

The reverse would be us sitting together and trying to write some text and movement at the same time, which would be...

S: I can't even imagine! That takes me back to my VCA days, where you'd just get a whole lot of artists in a room and you all look at each other blankly, and ask: 'What's everyone interested in?' And it's very hard to begin like that.

So I agree with that. Having it anchored so clearly from the beginning is proving very valuable.

My other piece of advice would be to pick your collaborators really wisely. Matt and I have lots of common ground here, and we really appreciate each other's work. And then it's about choosing the right people to bring into that conversation—we've put a lot of thought into who the other performers are, and who the other collaborators are. That's really important.

And what's the next step in the process?

M: A bit of assembly. Integration…

I think it's going to involve a lot of trial and error, and a lot of patience.

M: Yes. I've realised that you can't plan this project on the page. You can't anticipate that that sequence of movement and that piece of text will work together. You can read it on the page, talk about it, and say 'I think that'll work'—but then see it and know immediately that it doesn't work at all.

M: And equally, random combinations can somehow work together beautifully.

S: That's why these performers are so great because they are completely on board with trying things 50 times in different variations. We all know we're searching for that thing that works for some mysterious reason.

M: What's key is that we've both always agreed when it's working. It would be difficult if our sense of what's working wasn't so immediately aligned.

S: We haven't hit that yet. I'm sure that will come. There will come times when we disagree, and we’ll have to nut it out or compromise. We'll find a way.

Stephanie Lake is a multi-award-winning Australian choreographer, dancer , and director of Stephanie Lake Company. Her major works include Colossus, Replica, Pile of Bones, Double Blind, DUAL, A Small Prometheus, AORTA and Mix Tape, and have been presented in Melbourne, Sydney, Paris, Dublin, Glasgow, Singapore, Denmark, and Hong Kong Arts Festival among others.

Matthew Lutton is a theatre and opera director, and the Artistic Director and Co-CEO of Malthouse Theatre. He first worked with the company as an assistant director on Tartuffe in 2008 before becoming an Associate Artist in 2011. He most recently directed Solaris by David Grieg, which toured to The Lyceum (Edinburgh) and Lyric Hammersmith (London) and received two Critics' Awards for Theatre in Scotland. 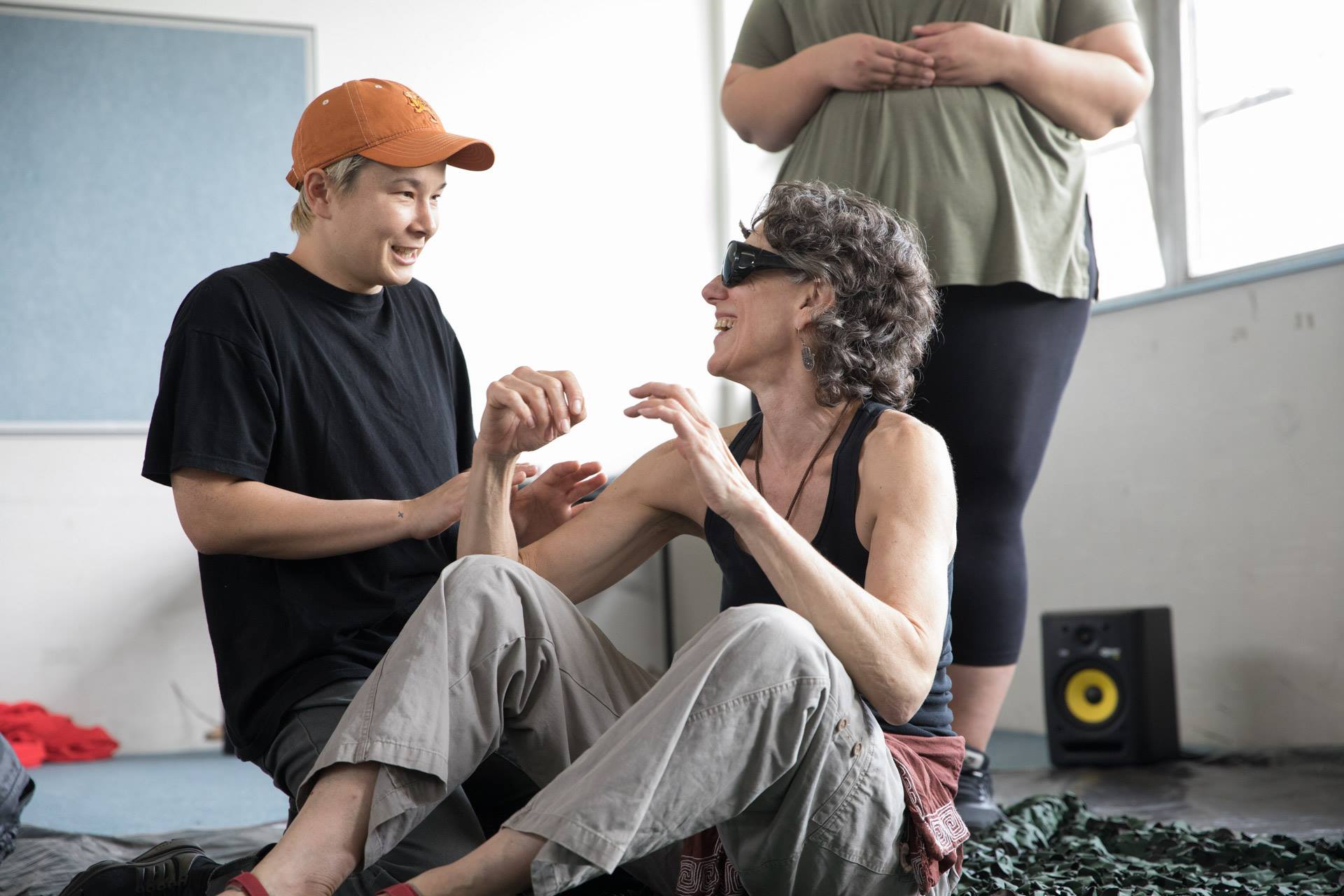