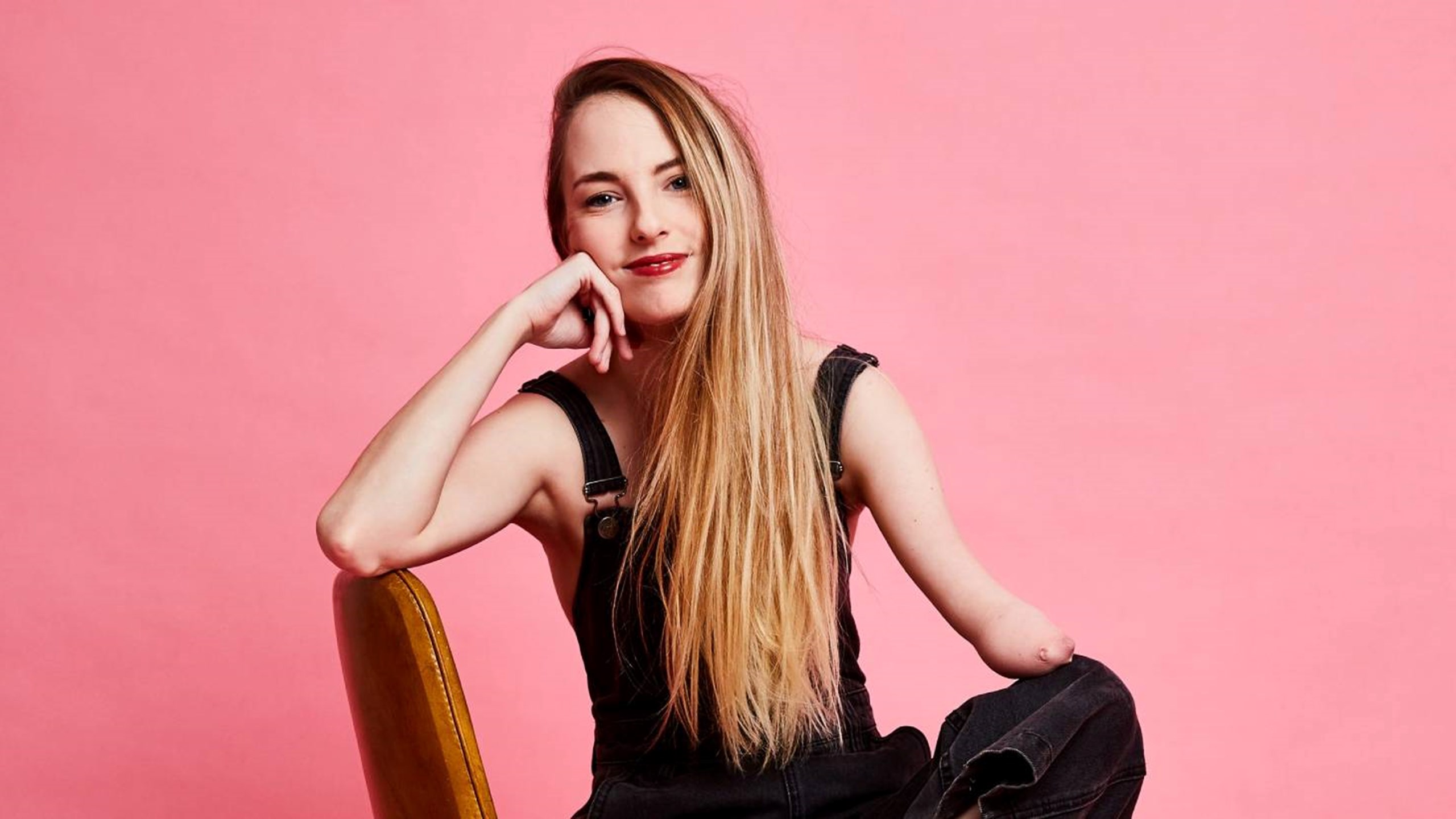 Madeleine Stewart is an award-winning comedian, writer, producer, advisor and lifelong disability advocate. After 11 years, she's back at The Malthouse with her first solo show So Brave as part of Melbourne International Comedy Festival.

Welcome back!—How does it feel to perform at The Malthouse again since your first stand-up set at 17?

Maddie: Being back at The Malthouse is a literal teenage dream come true. Last time I performed here was for Melbourne International Comedy Fest’s Class Clowns grand finals, an awkward teenager with stars in my eyes and dreamed of one day coming back to Melbourne, a big comedy superstar. My set was about Julia Gillard and prosthetic arms, which I had practiced on the school bus to mates.

11 years later, and I’m back better than ever before. I’ve still got stars in my eyes and my big dreams. Equipped with a powerhouse team behind me: Produced by Milke and directed by Jason Marion—No more testing jokes out on the bus!

What was growing up like for you—How did you know you wanted to be a comedian? Who were your comedic inspirations as a teenager?

Maddie: When I was 16, my brother and I went to see Adam Hills at our local arts centre. As you know, Adam has one foot, which he jokes about quite a lot. I also am missing a hand. That evening I saw people in my community look up at Adam with admiration, not pity—and I knew in that moment, I wanted to be like Hillsy.

After the show, I met Adam and he encouraged me to give comedy a try… And the rest is history.

Last year Adam asked me to tour with him. I had gone from looking up from the audience wanting to be like Hillsy to performing alongside him. A comedian in my own right. Another one of those 'isn’t life funny?' moments.

What was it like when you were starting out in the industry? Do you have advice for those who want to enter the profession?

Maddie: When I started in comedy, I was too young to even enter the pubs I was performing in. Other comedians had to come down and vouch for me to the bouncers.

Honestly, I think I was naïve and very lucky. The comedy industry, even though it's slowly improving, isn’t very safe for well, anyone that's not a white straight man. 11 years ago, Sydney didn’t have women only clubs or inclusive or safe clubs like they have now. It was dodgy pub basements, 15 of the same guys and me. I was very fortunate to have people who looked out for me in the early days.

The comedy industry now is improving so much. There’s a real push for safety and inclusivity—we aren’t completely there yet. Sex pests are still winning Grammys and whatnot. But it’s a great improvement. Now the only thing I need to worry about is my jokes.

What does it mean to be an accessible comedian? How important is feeling safe, and creating inclusive spaces for others?

Maddie: Everyone loves a laugh and a cheeky glass of wine. But for some silly reason, so many spaces are not accessible for disabled people to enter—either there are physical barriers like stairs, or there are societal barriers like an all-round ableist and unsafe vibe.

This prevents performers and audience alike from joining in on the fun. I'm a huge nerd for access and inclusion. It's super easy to include things like content warnings and audio descriptions. Not only are they free, but they are an opportunity to add more humour. If you have a bit of time and/or budget, get Auslan interpreters or hire an accessible venue (if that’s not an option, consider live-streaming your show).

Alice Wong famously says 'Access is Love'. And that's exactly it. By providing inclusive spaces you are saying: 'you are welcome here, you are safe here, you are valued here'. What an awesome way to set up a night of non-stop dick jokes, eh?

How did you navigate doing stand-up online during the height of the pandemic? What was the most difficult part about it and what do you look forward to the most now that live events are slowly coming back?

Maddie: Ok, there are pros and cons to online comedy.

Pros: you are at home, you don’t have to make awkward pre-show chit-chat with comedians (Yuck!), you don’t need pants, and it's accessible!

Cons: I love the feeling you get when you are on stage looking into the eyes of an old fella with his arms crossed, not wanting to engage with you and after a solid 10 minutes you make him snort laugh—Victory! There's no better feeling in the world.

BONUS QUESTION: What sets So Brave apart from your previous material? What does being brave mean to you?

Maddie: My show is called So Brave because that is what people often say to me in soft patronising tones.
To me, being brave is living my fabulous life despite those dickheads.

Madeleine Stewart has a decade’s experience performing stand-up alongside industry heavyweights like Adam Hills, Rove McManus, and Zoë Coombs Marr to name a few. She regularly uses her time on stage as an opportunity to talk about disability, speaking about the experiences and issues many disabled people face, especially herself. Her work has been showcased as part of the Sydney Comedy Festival, Sydney Fringe Comedy, and Melbourne International Comedy Festival. She’s also been featured on Tom Ballard’s Tonightly and on Dylan Alcott’s podcast, Listenable.

Her solo show So Brave is a dazzling hour of comedy written and performed by award-winning comedian Madeleine Stewart and Directed by MICF Award winner Jason Marion.

In Process: How Culture And Politics Transfers Between Generations