Building the Sonic Journey of Loaded 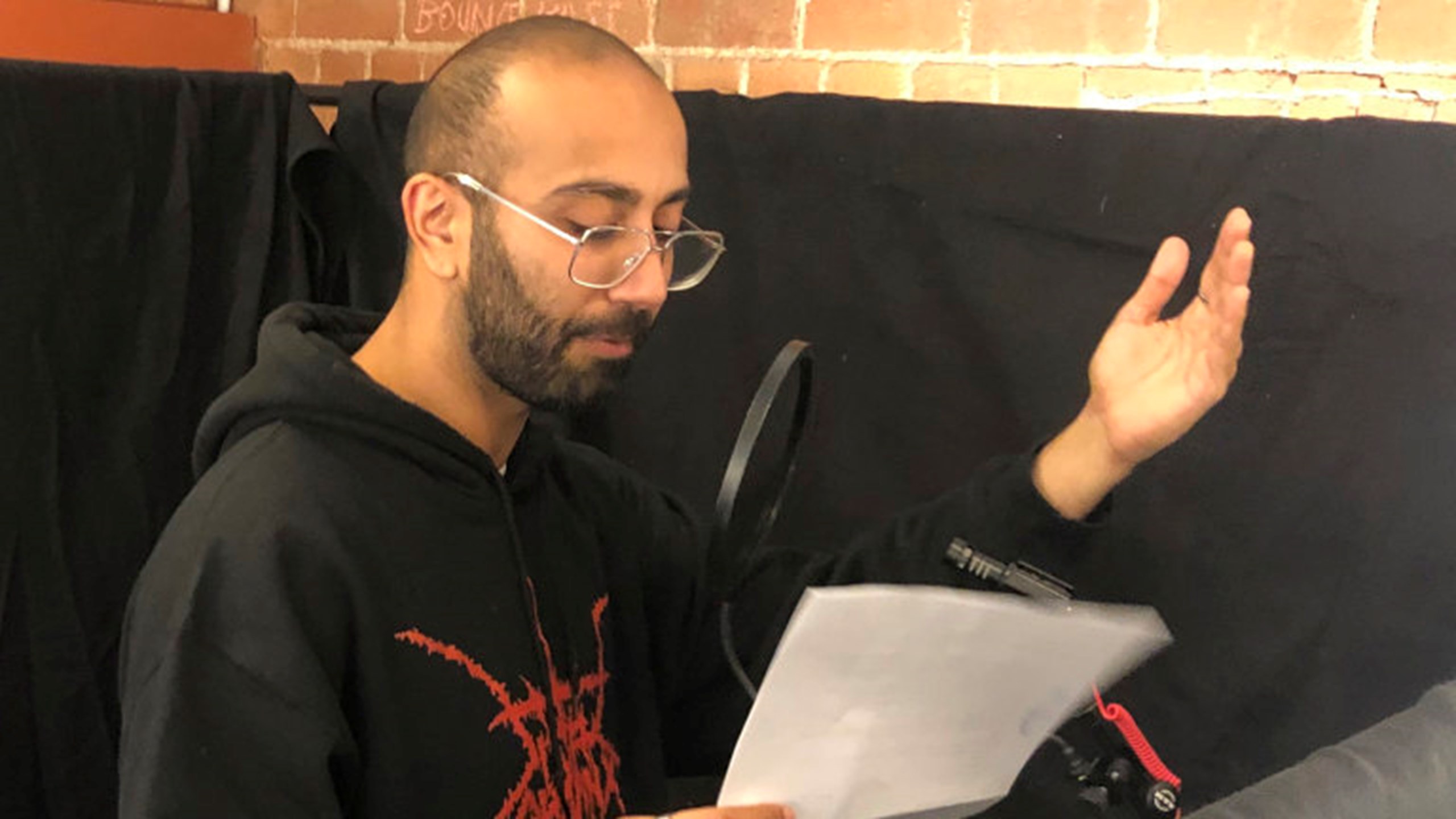 Whenever Christos Tsiolkas is around something special happens. It's quite often total strangers going out of their way to get us drunk, or drunker I should say, but there is a little bit of magic about him that's just wonderful to be around, both personally and professionally. As a composer, the inherent musicality in his writing makes scoring his texts both effortless and delightful.

My first experience of working on one of his adaptations was the miniseries Barracuda. Myself, the body double for the competitive swimming scenes and the production's sound designer all trekked off to a swimming pool in Castlemaine to capture the sound effects we needed for the swimming. Things started to go wrong quite quickly as it turns out professional swimmers swim really fast, and trying to follow them with a microphone without making a lot of noise just doesn't work at all. It's simply not possible to run silently alongside them at that speed.

I have no idea what it was doing there, or what it's intended use could possibly be, but for some reason there was a giant rubber band hanging up beside the pool. And a diving board. So, logically, we tied one end of the rubber band to the swimmer, hooked the other end around the diving board, I positioned myself at the end of the diving board with a long boom and we had our solution. Of course we didn't really think it through very well. Diving boards are designed to bounce, and I have thousands of dollars worth of someone else's recording equipment strapped to me. I was bouncing up and down like a maniac, in total silence, desperately trying not to think about how much trouble I was in if I messed it up.

Then came Merciless Gods. I'd happily talk about that all day, but now is not the time. What is relevant is that I got to meet Christos for the first time. I've worked with a few metal bands over the years. There's a fascinating phenomenon I've noticed, usually in metal. Some people just seem to be able to take all the dark inside them, funnel it into a creative outlet, and then it's gone. That's where it lives and they are then free to personify joy. It's a wonderful thing. Christos is the only example of that I've seen outside of metal.

When I received the first draft of Loaded I felt so lucky. Dan Giovannoni and Christos had been working on the script for over a year. Our lovely director Stephen Nicolazzo and I had been discussing it since the success of Merciless two years earlier. I didn't read the book or see the film when they first came out. I read the book in a hotel room in Manilla last January, but by the time the first draft came in I had a lot of the backstory to it. Here I was, sitting in the sun, in the middle of a lockdown, reading an adaptation from Christos as a very established writer in his 50s, with Dan and Stephen there with him, looking back at his first novel. The novel that started his journey as a writer, written when he was 27, looking back at a fictitious, yet deeply personal version of events that occurred when he was 19 years old.

Generally when I’m first reading a script I tend to keep half an ear open for useful moments I will need to draw from later on. Perhaps it’s just a feeling, or if I’m functioning as a designer there are usually scripted occurrences I will need to address. It could be a song, or a location. Or perhaps it might be important that we hear that it’s starting to rain. With Loaded I had the rare opportunity to just get swept up in the story.

It's been a pretty rough year for entertainment. One by one every production I'd been attached to was cancelled or postponed indefinitely. But Stephen just wouldn't let this one die. First it was a regular Malthouse Theatre production in the Beckett Theatre. Then it was redesigned for the new Malthouse Outdoor Stage. Then it was dead again. But Stephen kept on fighting for it. We had the idea to create a walking tour around the edges of the city—an interactive map that would guide you through a one hundred minute wander through the compass points of Melbourne, dressing the empty shop fronts along the way to support the story. But then the stage four lockdown happened so that was out as well. So an audio experience it would be, one that could be experienced in solitude, anywhere, anytime.

The plan to bring Roy Joseph down from Sydney to record the dialogue that had been made before the two week quarantine laws on entering Victoria were in place. Sydney Theatre Company were kind enough to come on board to provide studio space and technical support. We were very fortunate that the recording sessions accidentally coincided with the living alone 'bubble' being introduced to stop people like me going crazy. With the help of a studio link up program, Stephen and I could monitor the Sydney sessions from my place.

As fortunate as that was, in reality what it meant was that poor Roy performed completely alone in an empty room. We'd chat over zoom first, then go for a take. Depending on how well the Internet was running at any given time we'd get up to a 90 second delay on the studio feed. So after our chat we'd mute the zoom call, Stephen and I would sit in silence for a minute or so wondering if we were in fact recording, then the voice would begin. Roy did a brilliant job. We were going for long takes, so he'd pour his heart into the mic for 30 to 45 minutes, then sit, waiting alone, until 90 seconds later the recording would catch up on our end and we could go back into the Zoom call. Quite a bizarre way of doing things, but it worked.

I'm really lucky that I get to work across a whole lot of different platforms. I love the flexibility that needs to be built into a prerecorded score for live performance. Things change from night to night and the design needs to allow for this movement in time. On the other end of the spectrum, the specificity allowed to you when working in fixed time mediums offers an attention to detail that is equally exciting for exactly the same, yet completely opposite reasons. In the case of Loaded, we had some fun as many of our team members are used to the flexibility of theatre, yet what we created is absolutely fixed in time. This led to our dialogue edit taking far longer than we'd planned, and leaving me with three and a half days to complete the first draft of the score to get us back on schedule.

One of the many things I love about working with Stephen is the amount of careful planning that goes into every aspect of the production. His love of music means that the pre-production stage of the sound design for everything we work on is a very informed, detailed and pleasurable experience. As we had planned everything in advance, the score for Loaded was very easy to write. We had several moments of sourced music we knew would work. Christos sent through a wonderful version of the Greek folk song Evga Mana Mou that just felt right as a reference point for the tone of the work. I’d blended a few different versions of the song in pre-production, and these made up a layer of the introduction, as well as Toula’s performance at The 86. I then weaved fragments of the melody sparsely throughout, which gave me a handy tool when we needed a flavour of Ari’s heritage to be lurking around in the background.

This also functioned as a beautiful contrast to the moments when we heard the more modern pop songs referenced in the story. I’d put together some rough sketches using flavours drawn from some of these songs —Kanye West, The Black Keys, The Rolling Stones, The Streets—which could be shaped to fit around the dialogue, giving us a sense of what Ari was hearing at various moments.

And of course we had to hear his favorite song of all time, I Want You Back by The Jackson 5 (which has brought me great amusement since hearing people’s thoughts on the work). We hear it twice, once in the car, and once after a considerable number of substances have been consumed, as prompted by a ghost with a walkman. I can hear it plain as day at that point, but I keep getting asked why we didn't use it the second time.

The rest of the score is planned, multipass improvisations, usually with a combination of Oud, Guiar, and various different synthesisers. The inherent musicality in the text from both Christos and Dan made this a very smooth and enjoyable process. I used a gradually rising key centre as a broad structure across the whole work, shifting upwards in pitch by various increments as Ari’s night wore on. But essentially my work on this production was done before I started. The music was already there in the text, all I had to do was let it come to life.

I really love my job. Especially when I get to work on projects as fun as this one. Cramming 65 hours into 3 days is hard to describe as enjoyable, but in this instance it really was. This is the only long-form work I’ve made all year, and being able to complete it through the later stages of Melbourne’s lockdown was such a blessing. It was so interesting to work on a project so specific to Melbourne, at a time when Melbourne was so firmly shutdown. While still right there, it was completely inaccessible, and somehow so foreign to the location in Ari’s story beyond a memory and a distant promise for the future. The city plays a fascinating character in Loaded, as beautiful as she is ugly. The chance to reflect on this musically, in this context, with this team, was a truly unique and wonderful experience.

Daniel Nixon is a composer, sound designer, and multi-instrumentalist. He has written and recorded multiple albums, worked extensively as a session player, programmer and producer, and scored and designed numerous films, games, and ads and plays.

You can purchase the Loaded Audio Experience on Bandcamp here.

The Theatre of the Internet