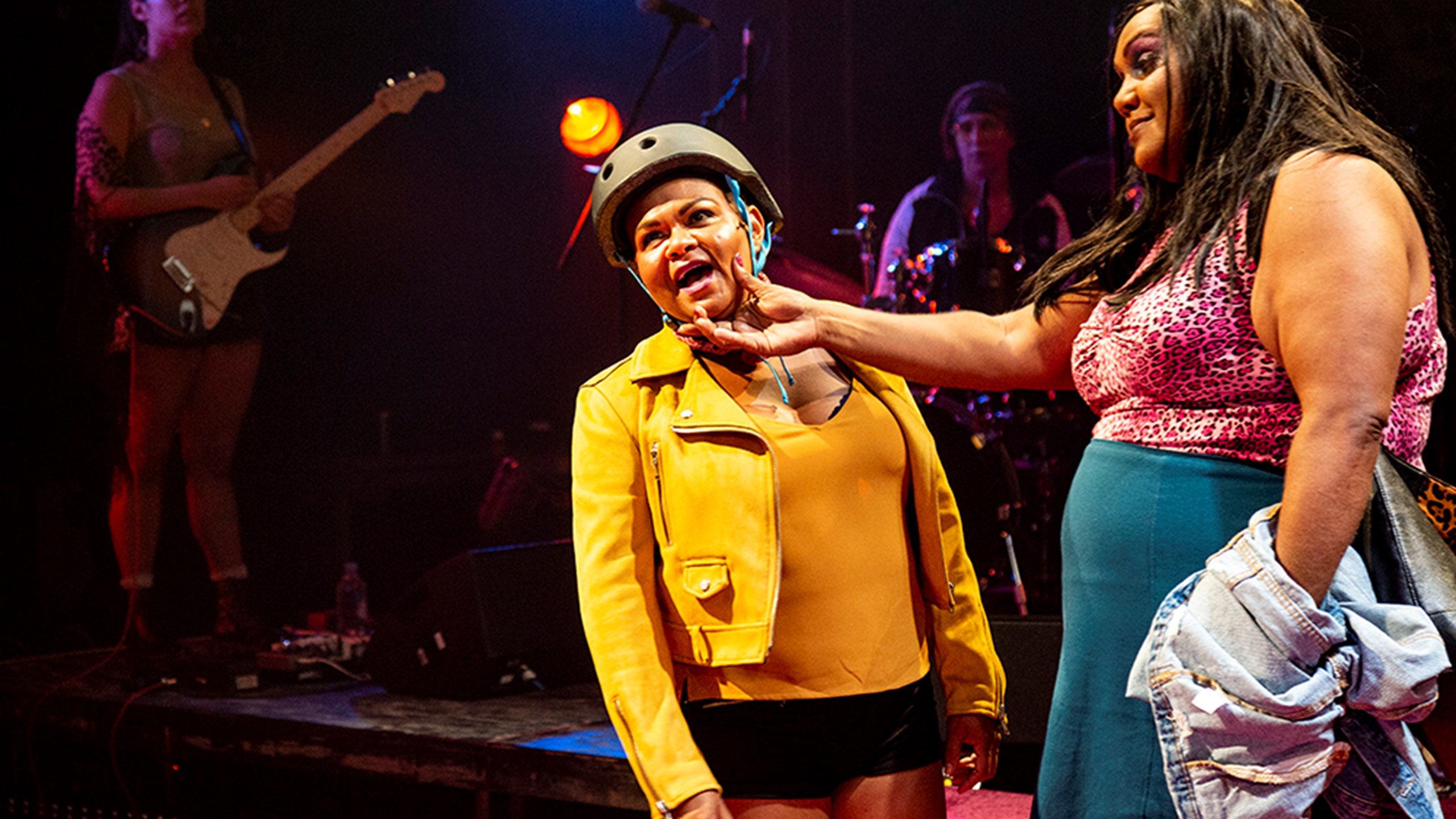 Alana: So, we’ve written the play together so we should write the note together too, right?

Ursula: Just shut up and go first will you?

Alana: There she is, there’s Barbara.

Ursula: Yeah, so f*ckin’ get on with it.

Alana: I first met Ursula Yovich’s alter-ego ‘Barbara’ at the Helpmann Awards in 2008. My play Parramatta Girls had been nominated but not won and I was having a consoling champagne on an after-party couch.

Ursula: Yeah, you were sulking.

Ursula: Yeah, you were.

Alana: Anyway, Ms Yovich, who had won the Helpmann for Best Female Actor in 2007 for her performance in Capricornia and whom I admired as one of Australia’s most talented performers, began to regale the partygoers with a ‘persona’ that was very different to the version of herself that Ursula said she was given the opportunity to expose on the Australian stage at that time.

Ursula: Barbara was pissed off, ramped up, foul-mouthed, shamelessly sexual, flirtatious and dangerous.

Alana: She was wild-eyed, hipshaking, loud-laughing and brilliant good fun. If you could continue to watch her between tears of helpless laughter and howls of disbelief, this was a version of First Nations female power to conjure stereotype-busting magic with.

Ursula: I guess it was a version of me that was pretty raw and exposed. A version that doesn’t usually see the light of day.

Alana: It was one of those moments when you witness something profound, you open your eyes to see what has always been there and you can never see that person in the same way again.

Ursula: When Vicki Gordon began managing my music career in 2010, she encouraged Alana and I to work together on a show for Barbara. You didn’t have to ask me twice. I had already felt the power of Alana’s words when we worked together on Barefoot Divas. I was given a monologue that encapsulated my frustration and anger. I was fired up and it felt like a natural progression to create an entire show around this anger and frustration and who better to tell this story than Barbara?

Alana: Stephen Page, having met Barbara, I supposed on a few occasions, joked that Barbara could have her own band called the Camp Dogs, after the dogs that hang around campfires in the Territory and elsewhere.

Ursula: Yes, this has been a running joke since 1999. With Vicki’s help, I applied to the Australia Council which funded development workshops of the musical.

Alana: With the brilliant Elaine Crombie and Jeremy Brennan, and the powerhouse Casey Donovan, directed by Leah Purcell.

Ursula: Vicki brought in stylist Melaine Knight and bass player Adm Ventoura who invited Debbie Yap and Michelle Vincent into the ‘all girl, sort of’ band.

Alana: When Eamon Flack came to a rough draft showing of the work in 2013 on a rainy Saturday out at the University of NSW, he saw the Barbara that we all saw that day – untamed, furious and sizzling hot.

Ursula: With Belvoir’s support we continued to work on the drama, and Adm and Alana and I would meet up and write songs.

Alana: Sitting in a circle and waiting as Ursula brought the remarkable instrument that is her singing voice to cohere the words and melodies.

Ursula: Vicki contributed her punk heritage influence with music for ‘Tick Sista’, brought in Jessica Dunn, and with Troy Brady and Elaine Crombie the show was ready to rock.

Alana: During rehearsals Ursula and I would sit next to each other and pass the laptop literally back and forth, as she wrote a section or revised a lyric and then passed it back to me to augment and write more. I can honestly say that it was a bizarre and wonderful experience of having two brains synchronised to one voice. Thank you to Sharne McGee and the many Katherine residents who have welcomed me to their town – especially Toni Tapp Coutts and Jill and Bill Pettigrew. This journey has been all about Ms Yovich and her profoundly unique spirit and I’m very grateful to have been able to ride with her in Barbara’s motorbike sidecar.

Ursula: I’d like to put Barbara aside for just a moment and give my love and appreciation to Alana for guiding and nurturing me as a new writer. For sharing belly laugh after belly laugh and encouraging me to bring Barbara into the foreground and to always jump head first into the shamelessness of this wonderful, complicated, intelligent and messed-up woman. Barbara is a mix of two very strong spirits and she could not have been conjured up without Alana, myself and every strong woman we have crossed paths with in our lives thus far.

Alana: We’d like to thank Leticia Cáceres for her incredible care, passion, and vision for this work and for assembling such an amazing design and production team. We also thank all the staff at Belvoir, especially Eamon Flack for supporting us to let Barbara, René, Joseph, and the Camp Dogs loose onto the world.

Ursula: Thank you to Monica Keightley and the rest of the MKM family and of course to my family, my father Slobodan Jović (Stan the Man) and my siblings who are my heart. My daughter Djarla and to Stewart for putting up with my extreme highs and my lows.

Alana: I guess we should give a language warning for this play.

Ursula: You mean the c-bombs and f-bombs.

Ursula: And is that likely to worry anyone?

Alana: Anyone else to thank?

Alana: And enjoy the show.

Ursula: Indigenous Sovereignty has never been ceded or extinguished. Respect and thanks to the elders of this Gadigal land. Enjoy the show.

Originally published by Belvoir in December 2017.